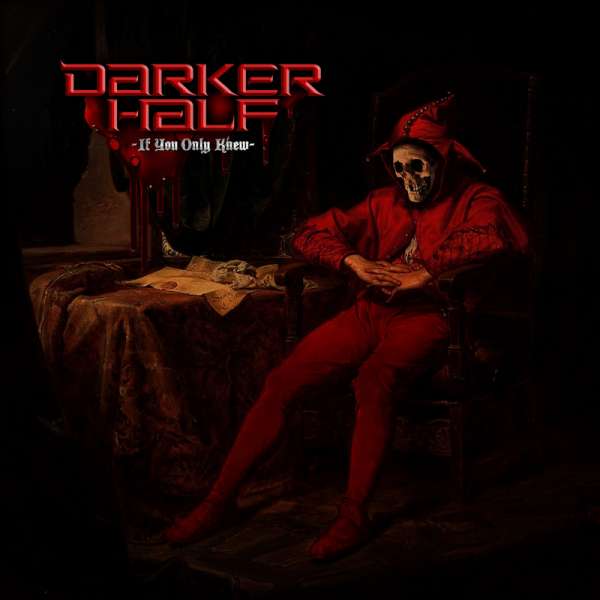 "If You Only Knew" is a step forward for DARKER HALF, according to vocalist/guitarist Vo Simpson.
It was - for the first time ever - recorded in the band's own studio, thus giving DARKER HALF more control over how everything came together. The setting also gave them more time to try different things out and to write as they recorded.
The band was a lot more focused on vocal arrangements and the songwriting than they have been in the  past. They wanted to make better use of the studio itself, since most of their previous material was written in a rehearsal/live setting rather than a studio setting.
"If You Only Knew" is heavier, faster, slower, more accessible, more metal, less metal, catchier and more progressive compared to previous releases.
Since all band members like lot of different music, it was hard for them to pull it all together into something that has its own style, while not becoming too all over the place.
Lyrically, there's a theme of isolation running through the album. This wasn't entirely deliberate, but DARKER HALF started writing the new songs after coming off their last European tour, so they kind of had a feeling of being a bit “stuck” in Australia.
Musically, it's a natural progression from where they have been going: It's still heavy/power metal at its core, DARKER HALF just widened the boundaries of what they wanted to mix with it.
Guest musicians on the album include Stu Marshall (Night Legion, Death Dealer), who contributed a killer guest solo on "Glass Coloured Rose", Marcos Rodriguez (RAGE) with a guest solo on the straight up metal song "The Bittersweet Caress" as well as Brendan Farrugia (Envenomed) with a guest solo on the quite personal song "Falling", among others.


Tracklisting:
1. Glass Coloured Rose
2. Falling
3. Into The Shadows
4. If You Only Knew
5. Sedentary Pain
6. The Bittersweet Caress
7. Thousand Mile Stare
8. Poseidon
9. This Ain't Over

Related links to "DARKER HALF - If You Only Knew - Digipak-CD"
Evaluations 0
Read, write and discuss reviews... more
Close menu
Customer evaluation for "DARKER HALF - If You Only Knew - Digipak-CD"
Write an evaluation
Evaluations will be activated after verification.
Similar products Customers also bought Customers also viewed
Similar products
MINISTRY - Relapse - CD
€4.99 * €12.99 *
MINISTRY - Relapse (Ltd. Digipak-CD)
€5.99 * €14.99 *
THE MURDER OF MY SWEET - Bye Bye Lullaby -...
€4.99 * €13.99 *
FEAR FACTORY - The Industrialist (Ltd.Digipak-CD)
€6.99 * €14.99 *
MERRIMACK - The Acausal Mass - CD
€6.99 * €13.99 *
Customers also bought
Customers also viewed
Dear friends of AFM! Our customer service is on holidays from December 23 until January 2. Orders are of course still possible and welcome as always, but the shipping of your orders will only start again after the 2nd of January. For questions, requests or claims we will beginn answering them after we´re back for you. Merry X-Mas and a happy new year, yours AFM-team!
This website uses cookies, which are necessary for the technical operation of the website and are always set. Other cookies, which increase the usability of this website, serve for direct advertising or simplify interaction with other websites and social networks, will only be used with your consent. More information
Decline Accept all Configure