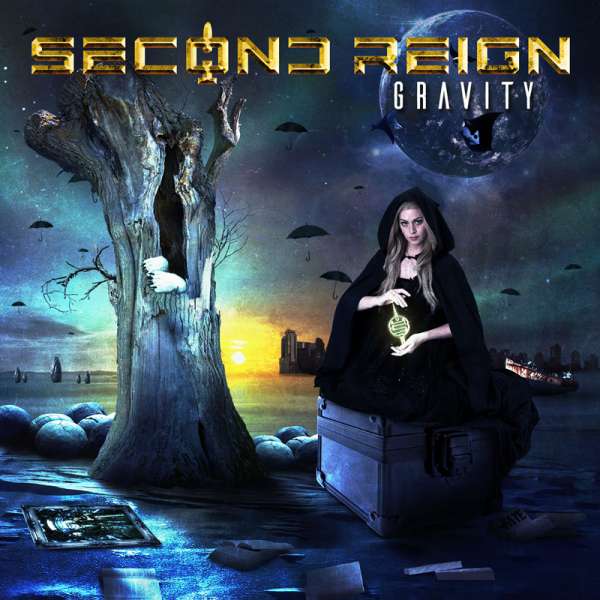 The Swiss quartet SECOND REIGN presents its debut album "Gravity". Get ready for a modern and powerful interpretation of 80's melodic rock!
With "Gravity", SECOND REIGN offers 13 catchy songs, proving that - although 40 years have passed since then - the 80's can be revived in a modern and contemporary way, combining the best of both worlds.

"Gravity", SECOND REIGN's debut album, was recorded over a period of 16 months. What started as only recording a few songs to get gigs and releasing them as singles, turned into a lengthy songwriting process and the recordings of the band’s very first studio album.
The 13 songs that are now featured on the album - with the last ones being written during the first lockdown in Switzerland - were selected out of around 30 original songs.
Recording the songs was rather special:
Each of the band members recorded their tracks on their own in the studio of Mack Schildknecht (Mack Music), beginning with drums, vocals and followed by guitars and bass. The keys were recorded at SECOND REIGN’s own rehearsal room and handed over to Mack later.
The only time all band members were in the studio at the same time was on the last day of recording, celebrating the last take together - a guitar part by Alain. It sometimes turned out to be a rather big surprise for the band members hearing the tracks for the first time when nuances in vocal lines were changed, drumbeats recreated, or additional guitars added.
With "The Truth", the very first original SECOND REIGN song is featured on the band's debut album. Coming from different musical backgrounds, all band members had their own - not necessarily compatible - ideas about where to go with the band. After trying this and that, playing some songs of previous bands, discussing, and experimenting with different styles, "The Truth" marked the first step in finding their own sound and style: a modern and powerful interpretation of 80's melodic rock.
"Borderline", on the other hand, was a song written before SECOND REIGN as a band existed. It was played like an up-tempo song at first. It somehow didn’t fit well, and the band started playing it slower - how it was originally intended - and a power ballad was born.
What started as a joke, ended with the only guest musician on the song "Home". The early demo was missing a guitar solo, so Stephan added a (synth) saxophone solo as a placeholder and named the version "Home, Kenny G. Remix", as a homage to the well-known 80's saxophone player. Time went by, the band somewhat started liking the idea, they looked out for a saxophone player to provide a solo to the song "Home“, and found him: Beda Felber. In addition, a version with a guitar solo also was recorded.
Not only did Mack Schildknecht record and mix the album, he also was kind of a fifth band member during the recordings, evolving the sound of SECOND REIGN to a next level and pushing the band to their limits - and beyond. With his flair for sounds, frequencies, and arrangements some of the songs were rearranged and polished during recording. Mixing the songs, though, turned out to be the first challenge, as almost every band member had his own idea how the mix should be done, which turned out into several long discussions. In the end, the band mostly followed Mack’s suggestions.
Mastering the tracks became a bit of a hassle as the band had exactly in mind how their songs should sound like in the end. It took them a few trials and errors until they found Christoph Beyerlein from Stem Masters, the person who understood their expectations best, and created a powerful in-your-face master.
Although listening - or consuming - music has changed a lot in the past 10 or 20 years, it was always clear for SECOND REIGN to not only focus on the music, but also on a packaging that suits the songs, and visually enhances the experience of "Gravity".
Spending hours of studying booklets and artwork in their youth, the band wanted to create a booklet that lets the listener dive into the world of "Gravity" - and lets them discover hidden details and messages in the artwork. With Domagoj Taborski, a Croatian graphics artist, they found the perfect counterpart for bringing their visions to life.
Naming the album was almost the hardest part of the process. "Gravity" seemed to reflect the album best and has an ambiguous meaning for the band. As gravity is a force - or rather a consequence of objects moving - "Gravity" shall attract the listeners and pull them towards SECOND REIGN's first album: An album about friendship, gluing together four strangers with different backgrounds and ideas, all thrown into a creative melting pot and becoming SECOND REIGN.
With "Gravity", SECOND REIGN present a debut album with 13 catchy songs, proving that - although 40 years have passed since then - the 80's can be revived in a modern and contemporary way, combining the best of both worlds.