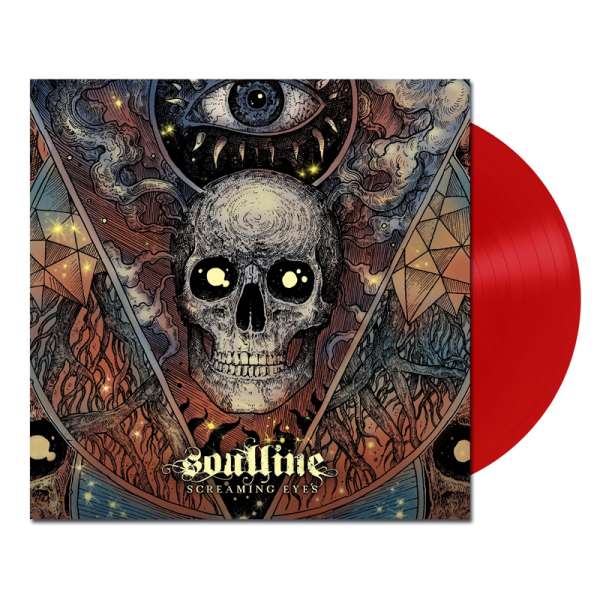 The CD Digipak contains two bonus tracks that are not included on the album's limited vinyl LP edition.

The eyes are the windows of the soul, they say. And the metal soul of this record screams, it screams loudly for a revenge from life.
The life of an ordinary human being who had a very deep low, a shadowy part of existence that he accepted, understood and against which he now fights. And it is precisely the decision to arise again that is definable as heroic.
"Screaming Eyes" is a journey side by side with all those people who are tired of suffering and feeling bad, and who decide to react and start living again by finding the resources within themselves.
The sequence of the songs coincides with the heroic path of the listener: With the opening of "Your Death (Is My Life)" there is the killing of the "voracious worm" inside, in order to live again. It's an opener that kicks the past and shows the will to fight.
With "Screaming Eyes," the fight is concrete and it's a lament for what has been, while putting a definitive stop to it by moving on. Often the resources to get out of the dark side are already available to you: "Salvation Inside" invites you to do what you love, with passion and dedication. It invites you to be honest with yourself and to talk to each other until the lifeline suddenly appears. In this case, the lifeline is the music itself, which gives strength and power in everyday life.
The epic "Dragonfly" coincides with the highlight of the album: The moment where our hero is incited to get up, to take all the strength in his possession and act to take advantage of his new life, now lightened by the dead weights.
The desire for revenge is strong, but it is also easy to fall back into the abyss. A second is enough to erase all efforts. One must have confidence and it is important to understand weaknesses. "Against Myself" is a dark and powerful reflection about the eternal struggle between angel and devil: "Do I give up or do I fight back?".
The cover of Paradise Lost's "Say Just Words", 25 years after its release, fits perfectly in a speech about courage and ability to understand the human being and bring him on the right path, even if sometimes the efforts are in vain.
It's not wrong to look back, to understand our own demons starting from what we were as children. And "The Child I Was" is just a dive into the past and a search for happiness not as a goal but as a path.
To stop and reflect is heroic because it takes courage to face one's own ghosts. Just as it takes courage to admit to your own self that you are not invincible. "Stay With You" is a warm invitation to stop and look at ourselves, because this life is our last one.
The hero is also, and above all, the one who, when he realizes that there is nothing more to do, just lets go. Panta Rei, as they say in Greek: everything flows. And often when you let it flow, then good things happen. "Keep My Last Song" is a summary of the action of the hero who gives himself completely to fight a cause, but at some point, loses faith and decides to stop the battle. But as it is always said, you can lose a battle, but what is important is to win the war. And this one, the hero, is willing to win.
As per their tradition SOULLINE always try to add something new to their sound when composing. Compared to his predecessors, the band took more time for this album production. They even recorded some songs several times in different ways until they found the best solution.
So somehow the pandemic (which kept them off the stage) helped the band to make perhaps their best album. After mixing the last 3 albums in Sweden, SOULLINE decided to remain in Switzerland this time, and to work with V.O. Pulver (Destruction, Pro-Pain, Nervosa), which turned out to be a winning choice.

Tracklisting:
Side A:
Your Death (Is My Life)
Screaming Eyes
Salvation Inside
Dragonfly

Side B:
Against Myself
Say Just Words (Paradise Lost Cover)
The Child I Was
Stay With You
Keep My Last Song