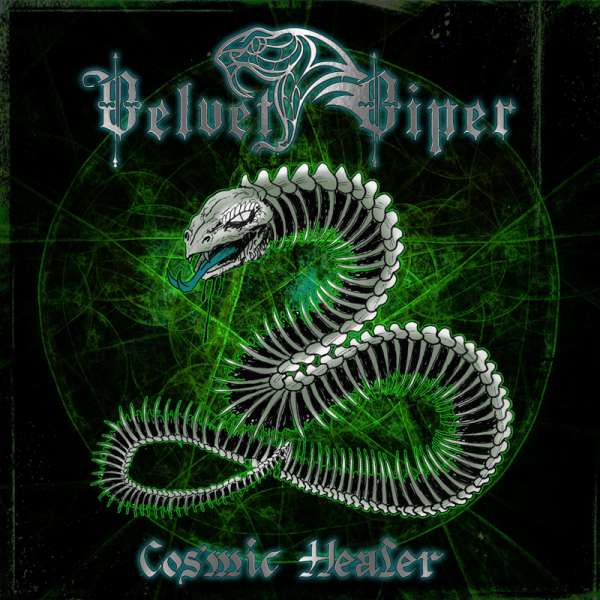 VELVET VIPER are back with their energetic new album "Cosmic Healer" that offers a lot of groove, catchy choruses and a fresh sound!
VELVET VIPER's new album "Cosmic Healer" presents the band as you know them from their energetic live shows. This time they offer more compact songs, often hovering in the upper tempo range.
The basics of the 10 tracks were recorded with a lot of live feeling in the well-ventilated Jangland Studio by the tight-knit band mates.
Lots of drive, lots of groove, catchy choruses and a classic, fresh, and authentic sound with a high-spirited Jutta Weinhold make this third album since the band's reunion the strongest album of the band to date.

The band comments on the songs:

SWORD SISTER
A sword sister does not give up. Only cowards die a thousand times before falling into the pit.

LET METAL BE YOUR MASTER
A declaration of love to metal. We are part of the scene that is good for us. Conclusion: We let metal be our masters.

HOLY SNAKE MOTHER
Cleopatra brought snakes from the riverbed to her death tomb. The creatures should kill her. Everyone took a bite, only one did not, the VELVET VIPER. She put the crown on her head and dug her way through the stony grave to freedom.

VOICE OF AN ANARCHIST
Cursed and misunderstood is the word anarchy. Hear the anarchist's voice: He does not want to rule, but neither does he want to be ruled.

SASSENACH
The story of Saxon's lady Sassenach. Sassenach is the ruler of the beginning and the end.

OSIRIS
A god of fertility blessed with mystical magic. Osiris, brother of Isis. Judge of justice for the living and of respect for the dead.

ON THE PROWL
Everyone, who dedicated their live to music, asked themselves from time to time: How much longer will rock 'n' roll live?

LONG SHADOWS
When the culture's sun is low, even dwarfs cast long shadows. We don't listen to the warnings; we saw off the branch we're sitting on. Do not compete with nature because it is bigger than you.

DARKNESS OF SENSES
Time stands still and the night knows no tomorrow. Do not lose your dreams - even if dark thoughts are with you.

GÖTTERDÄMMERUNG
After the daughters of the Rhine have lost the Rhine gold, they curse the gods, setting the twilight of the gods in motion.

Tracklisting:
Side A:
Sword Sister
Let Metal Be Your Master
Cosmic Healer
Holy Snake Mother
Voice Of An Anarchist

Side B:
Sassenach
Osiris
On The Prowl
Long Shadows
Darkness Of Senses
Götterdämmerung (Acoustic Version)